Greetings from secretariat of the 18th Urological Association of Asia (UAA 2020) Congress in Korea.

Although the pre-registration deadline is today October 8th, registration will be available on the online platform from the 12th to encourage resident members to register. For free online registration please visit the congress website: 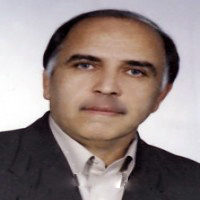 With approval of IUA board of directors , Dr. Ali Razi and Dr. Farzin Soleimanzadeh were elected respectively as the chairman and the secretary of IUA 24th congress in 2021 and this decision was liaised with them through separate directives.

With regard to unpredictability of next year condition for gatherings , the discussions about the procedure of execution and possible routes would begin soon and the related news would be shared in the near future. 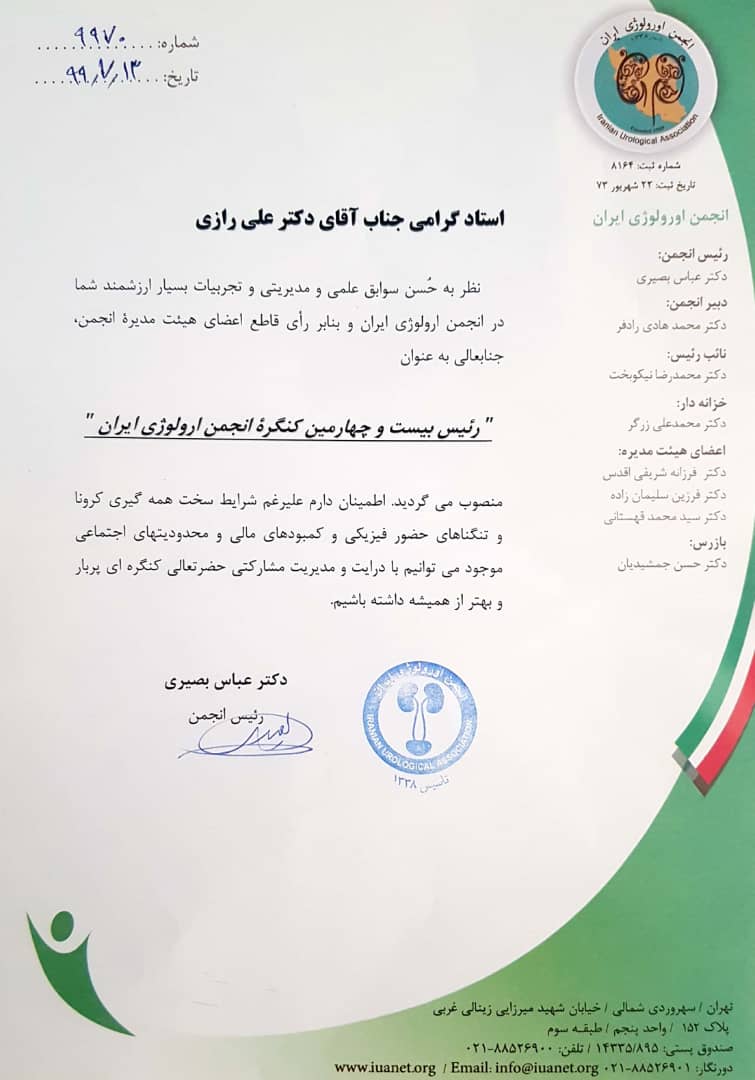 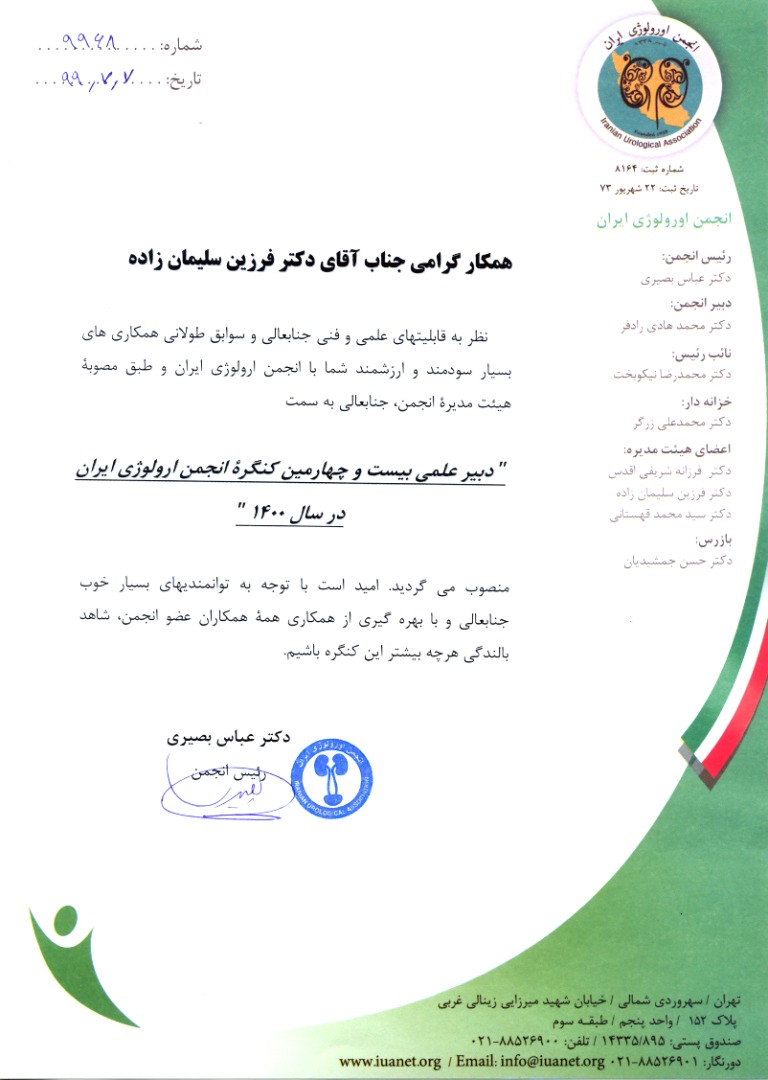 Dr.Abbas Basiri , the chairman of IUA , proclaimed the Association's protestations over the frequent increasing admission capacity of urology residents in a letter to ministry of health and medical education.

In this letter , it has been accentuated that this increase is not even compatible with the health ministries own declared census and estimations and policies . A copy of this letter has also been delivered to the head of Islamic Republic of Iran Medical Council (IRIMC) and the head of Iranian Medical Associations Assembly . 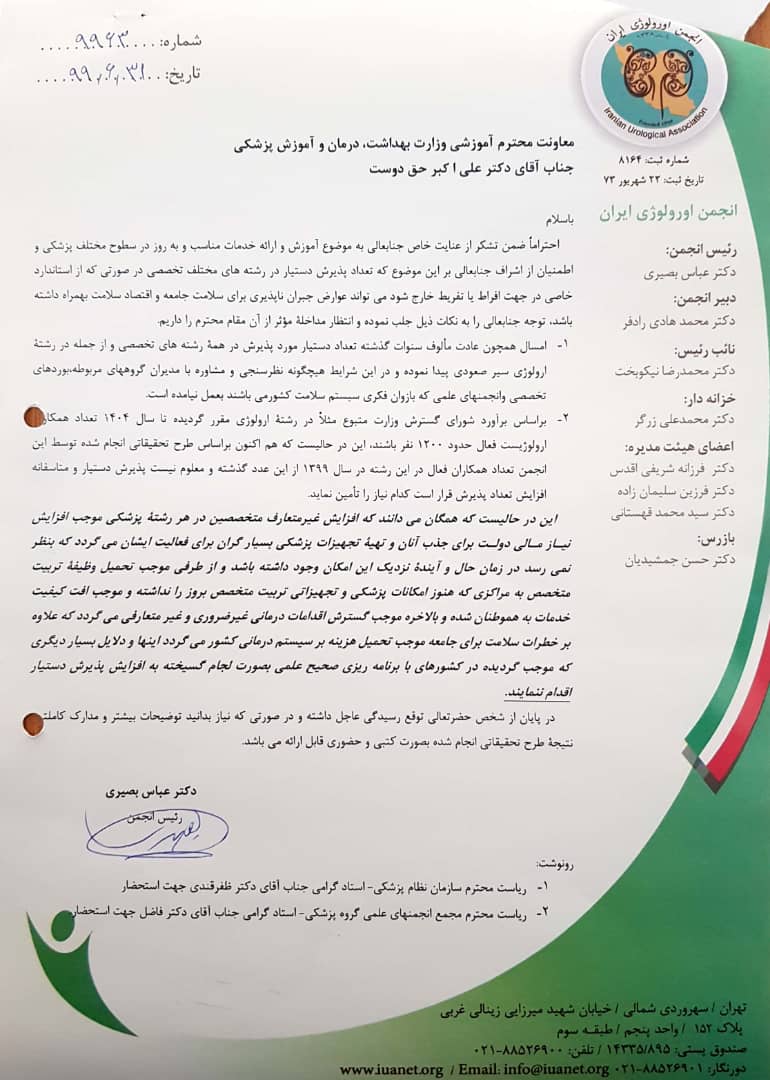 As you are acknowledged , the chairman and secretary of IUA 23rd annual congress were introduced in the general assembly of 22nd congress.

Planning for 23rd congress execution was started in November 2019 by forming the scientific committee as the first step to compile the scientific schedule during regular meetings.

Throughout the meetings , the congress strategy was approved to be based on presentation of beneficial and functional issues for the majority of attendants ( all of whom are almost general urologists ) as well as launching updated data of different subspecialties.

Perhaps it was the first time to compile the scientific schedule for each branch under direct supervision of the relative branch chairman which leaded to a more profound schedule.

Considering the sum of time dedicated to the scientific program , the allocation of time for the branches was performed in the common meetings of scientific and executive committees and IUA board of directors; hence , the complete schedule of IUA 23rd congress was prepared to be released on the website  on March 2020 ( 4 months before the scheduled date) so the congress would be executed on June 2020 at Abureyhan international conferences center.

However , the COVID-19 outbreak and limitation of carrying out gatherings hindered the congress execution as it was planned.

After brainstorming in several meetings of IUA board of directors , the virtual execution of the congress was authorized.

Regarding the problems due to internet access limitations , there was a probability of the lecturers not getting prepared for their presentation on the arranged time and the consequent disorders; therefore , it was decided to receive all the lectures in an identical format of powerpoint slides with voice recordings beforehand and make them ready to be shared as videos on the determined time.

Concerning that not all the speakers were completely familiar with producing voice containing slides and also unifying the slide formats , a guideline about how to add voices to powerpoint slides  was prepared by the congress secretariat in written and video form and was shared via the groups for each panel.Also the uniform format for the slides were sent to the lecturers.

After receiving the files , they were edited by the secretariat ,  categorized and uploaded on the congress platform according the schedule.

One of the most important circumstances to be discussed beforehand  was choosing the best platform on which the virtual congress would be uploaded. Finally , Skyroom was selected as the platform regarding the board of directors opinions. Two accounts were purchased and activated for the congress and after verifying the function of them by some test , the links were activated and shared on the website and also delivered to attendants via sms.

One other arrangement that took place in the IUA virtual congress was transmitting the programs on Aparat platform simultaneously; This would help the attendants to pursue the programs lively on Aparat with a good quality in case of any problems occurring in skyroom platform.

The advantage of utilizing this system was that there was no need for the online presence of the speakers  while they had sent their videos formerly; However , with all members in concordance , the panel chairmen and members were online during their program transmission and in the end of the program took part in the question and answer sessions to reply to the attendants.

Finally, after several meetings to assess probable challenges and consider appropriate solutions , the 23rd annual congress of IUA was executed on 19-21 Aug 2020 and 26-28 Aug 2020.

The exact time and execution framework were both uploaded on website and sent to our fellow workers via sms.

Approximately 60 articles were sent for the congress that the selected ones and also  the available videos ( about 170 videos)   would be shared with the colleagues in an e book format.

The problems concerning CME credits of the virtual congress , regarding that it was the first congress being carried out virtually and the relative ministry had not any prepared planning for it , are being resolved by our correspondence  with the ministry.

After all , problems and imperfections are an inseparable  part of such programs and we express our apologies to all our dear fellow workers and hope to present programs of higher quality in future sessions.

With respect to IUA board of directors selection , Dr.Nima Narimani, a faculty member of Iran University of Medical Sciences urology department, was elected as the administrator of the national Men's Health day programs execution.

Since 13 years ago, by IUA's suggestion and innovation, the first Thursday of Esfand has been titled as National Men's Health day.

Some years later, regarding the growing importance of the related issues , this was changed to be Men's Health Week by ministry of Health and Medical Education in order to get more opportunities to engage with the diverse dimensions of the problems concerning men's health exclusively or more than other groups of society.

Obviously, it is not about neglect of problems related to other groups like women or children; but it tends to be an opportunity to emphasize on the potential sources of apprehension for men's health, specially considering the fact that men are more negligent in their health status. 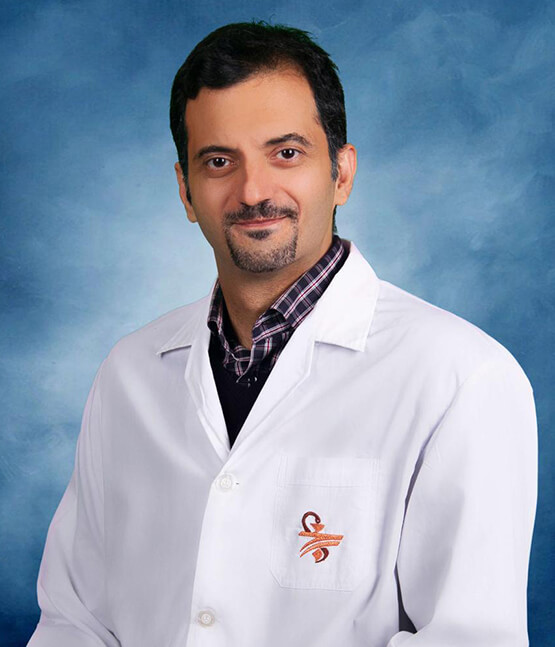